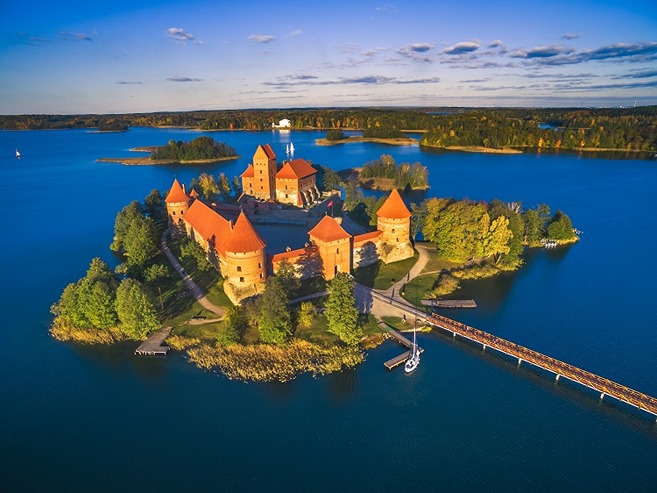 Assemble at the airport and take-off to the city of Moscow, the capital of Russia.
DAY 2

Upon arrival, enjoy the rest of the day free at leisure.
DAY 3

Kick off the day with an exhilarating adventure to the Moscow Kremlin, an old fortified complex in the heart of Moscow that has housed generations of Russian rulers and remains as the official residence of the President of the Russian Federation to this day. Home to some of the most beautiful Russian Orthodox monuments, make your way to the Cathedral Square to see the magnificent churches that have each played their part in history. Gaze in wonder at the architectural masterpieces of the Assumption Cathedral, the Annunciation Cathedral and the Archangel’s Cathedral, as well as the Tsar Bell and the Tsar Cannon that are displayed on the grounds of the Kremlin. For lunch, we will dine in the Turandot Palace Restaurant. The baroque interior of the place is unbelievably extravagant, with hand-painted furniture, gilded light fixtures and a fresco cupola ceiling. After lunch, embark on a Moscow Metro Ride, one of the most elaborate transport systems and beautiful railways in the world. We will also visit the Izmailovo Market, located not far from Partizanskaya metro station, where you can find original, peculiar, old fashioned articles steeped in history. As dusk falls, prepare yourself for a night of entertainment with a performance by the world-famous Moscow State Circus.
DAY 4

Take a side trip out of Moscow and head to the pilgrim town of Sergiev Posad, founded by the country’s most revered monk, St. Sergius of Radonezh. Pay a visit to the Trinity Sergius Lavra, the most important landmark of this town as well as one of the most important monasteries of the Russian Orthodox Church. Then visit a Matryoshka Doll Factory to learn about the production of these traditional nesting ‘Trinity’ toys.
DAY 5

Go on a sightseeing tour of the unique Russian Moscow city, which will bring you to view the Red Square, GUM Department Store and visit the St.Basil’s Cathedral. Go on-board a high-speed train that will take you to St Petersburg, second largest city in Russia.
DAY 6

Enjoy a city tour of St. Petersburg and explore the sights of the Kazan Cathedral, Church of Our Savior on Spilled Blood and the St. Isaac’s Cathedral. We will also visit the State Hermitage Museum, which comprises of five buildings that were formerly the residence of the Tsars and home to one of the finest art collections in the world, with the bulk of the vast collection being found in the grand Winter Palace.
DAY 7

Pay a visit to Peterhof, an imperial estate situated just west of St. Petersburg that is often referred as the ‘Russian Versailles’, the favourite Summer Palace of Peter the Great. Marvel at the magnificent palace, their richly decorated interiors with gold, and beautiful fountains adorned with gold statues of ancient Greek and Roman gods and goddesses. After visiting Peterhof, we will enjoy a visit to the town of Pushkin, a picturesque suburb in St. Petersburg. The Catherine Park, an inseparable part of the ensemble and a very poetic place, is a magnificent example of creative labor spanning several generations of talented Russian architects. During the Catherine Palace excursion, you will learn about the mysterious history the Amber Room and see its splendid interiors, designed by eminent architects, which was recently restored. At night, enjoy a folk show and dinner with unlimited vodka and wine at the authentic Russian restaurant - Podvorye, where President Putin held his 50th birthday celebration.
DAY 8

Today we will depart St Petersburg by train and will arrive at Tallinn, Estonia’s capital on the Baltic Sea, the country’s cultural hub. Note: In the event that the train is fully booked due to 1 departure per day only, it will be replace by coach instead.
DAY 9

Take on a city tour of Tallinn, a picturesque old city, where whole districts date back to the middle Ages. You will visit the Old Town with its quaint narrow streets and beautiful merchants' houses exemplifying the best of Gothic architecture. The tour includes Toompea Castle, the 13th century Dome Church, the 19th century Russian orthodox Cathedral of Alexander Nevsky, the 15th century Town Hall Square, the Old Guild built to celebrate Tallinn's membership in the Hanseatic League, and St. Olaf's Church. Tonight, we will have a local dinner at a Medieval restaurant in the city center.
DAY 10

Then, we will pass by parnu and depart for Sigulda and visit the Turaida Museum Reserve, a historical centre of Turaida and comprises archaeological, historical and art monuments that tell us about the events that have taken place since the 11th century. Turaida church, one of the oldest wooden churches built by the local rural craftsmen, is situated here. A graveyard was established here for the ﬁrst baptized Livs. This evening, arrive at Riga, Latvia’s capital, set on the Baltic Sea at the mouth of the River Daugava.
DAY 11

A sightseeing tour begins with driving along the central boulevards of Riga, enjoying the view of the City Canal Parks, the Bastion Hill, the Powder Tower, the Latvian National Theatre, the Fine Arts Museum, the Art Nouveau buildings of the beginning of the century, the Freedom Monument erected in 1935 to celebrate Latvia's independence, University of Latvia, the Opera House, and Daugava River with its bridges. During the walking part of the tour you will enjoy the beauty of the ancient Hanseatic city, while strolling through the cobble-stone, picturesque streets of the Old Town. In Old Riga you will see the Dome Cathedral which boasts one of the world’s largest pipe organs, St. Peter's Church with magniﬁcent views of the city from its steeple, the old Guild Houses, the Swedish Gate, the architectural ensemble Three Brothers, St. Jacob’s Church, the Parliament House, Old Riga Castle, and view the many wonderfully restored buildings, now housing cozy restaurants, cafes, bars and souvenir shops. Next, we will have a food tasting while visiting the Riga Central Market! During visit, you will be able to taste different types of bread, marinated vegetables, ﬁsh, meat and cheese. Then take on a Canal Boat Tour and enjoy nice ride in city channel and explore Riga from different angle.
DAY 12

Today, visit the Rundale Palace, the ‘most magniﬁcent masterpiece of baroque architecture in the Baltic States. The palace boasts a beautiful French-style park surrounded by a canal. Enroute we will make a stop at the Hill of Crosses, a unique place in Lithuania where millions of crosses and rosaries are put on two hills by Lithuanians and others from all over the world in an expression of spontaneous faith, and as a symbol not of grief and death but of faith, love and sacriﬁce. This evening, arrive at city of Vilnius, Lithuania’s capital, known for its baroque architecture, seen especially in its medieval Old Town.
DAY 13

Vilnius city tour. During sightseeing in Vilnius tourists visits Old Town of Vilnius, which is included to the UNESCO World Heritage List, looks like a maze of small streets. In the center of the Old Town stands the Cathedral with a bell tower. In the narrow old streets one will see numerous pieces of historical heritage, like St. Anne's Church - a gem of Gothic architecture, University building, St. Peter -Paul Church, as well as the ruins of the Upper and Lower Castle. We will go to the Užupis District, and head to Hill of Three Crosses. Legend has it that long ago seven Franciscan monks were cruciﬁed here, and four were thrown into the Vilnia River afterwards. The ﬁrst crosses were erected on the hill in the 17th century in memory of these martyrs. During Stalin's rule the three crosses were removed and buried. It was only on June 14, 1989, that a new memorial was unveiled, rebuild according to the original plans. These crosses are symbols of Lithuanian mourning and hope.
DAY 14

We hope you enjoyed your trip with our company and we look forward to seeing you again for your next trip.
Tipping Guideline:

• €120 per person
Note:
• A minimum group size of 15 passengers is required for a conﬁrmed departure. • The sequence of the itinerary, ﬂight schedules and hotels are subject to change without prior notice in the event of unforeseen circumstances. • Activities are subject to weather conditions. • During major events and festivals, accommodation may be re-located to outside of the city or in another city without prior notice. TRAKAI

Visit four distinct nations Latvia, Lithuania, Estonia, Russia and experience the cultural rebirth of the Baltic States and the imperial riches of St. Petersburg and Moscow. 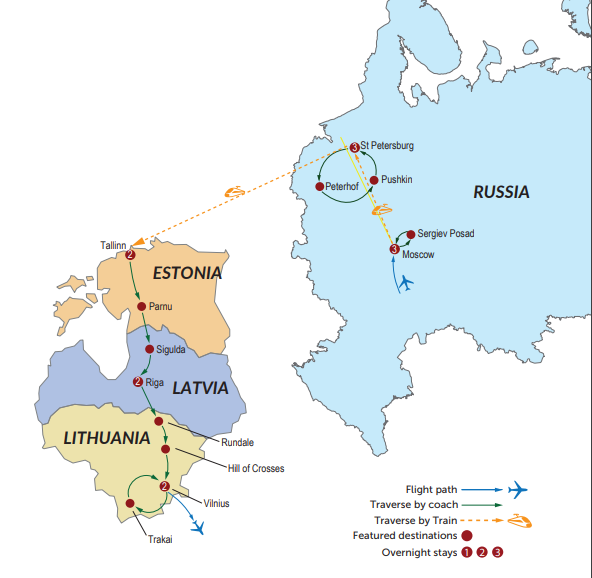 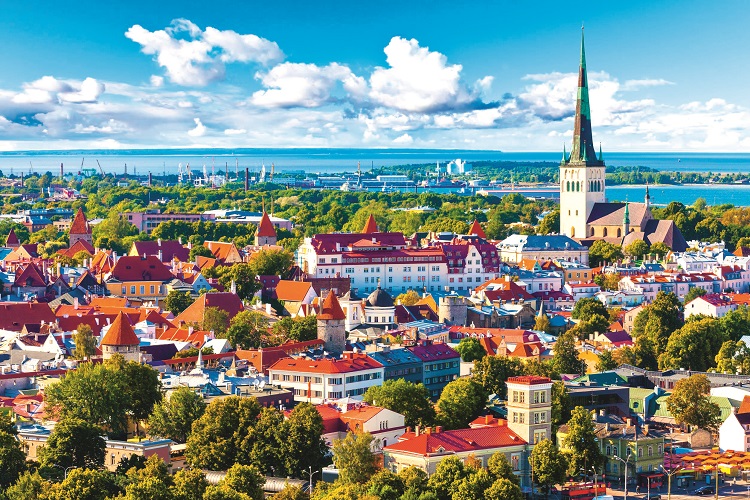 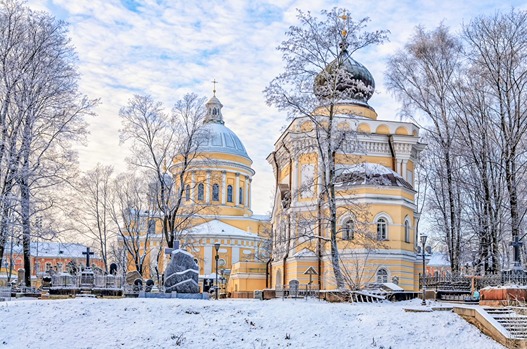